Hemp and Cannabis - Are They Different?

If you are a commercial grower of hemp, you have probably been dealing with some pretty widespread confusion about what you are cultivating and why. While “marijuana” may not be federally legal yet in the US, hemp is. So does this mean that hemp and Cannabis are totally different?

The short answer - no.

So, What is Hemp?

To many of us who may be familiar with Cannabis, we are aware of a clear distinction when we discuss “marijuana” and “hemp”. On the other hand, what does tend to spark semantic confusion are the terms “Cannabis” and “hemp” and whether there is another distinction to be made here. Why is this important? Because too often the terms “hemp” and “Cannabis” are separated to distinguish what we normally term “marijuana” plants from their non-psychoactive siblings. Such long standing misnomers and misconceptions about the Cannabis plant only contribute to its stigmatization and keep people from exploring the versatility of this amazing natural gift.

For clarity’s sake, let’s define a few terms before we move forward .

“Cannabis”  is the genus name for a family of plants known as Cannabaceae. Indeed, both hemp and marijuana are Cannabis. The difference is that some plant species will be bred with a THC content over 0.3%, pushing them over the legal limit and resulting in their classification as “marijuana”. Those plants that are bred with less than 0.3% of THC will be classified as “hemp” and can be used for non-psychoactive and industrial purposes.

The three most referenced species of Cannabis are sativa, indica, and ruderalis.

Some assert that all Cannabis can be assigned as subspecies to C.sativa, so that it might look something like this: 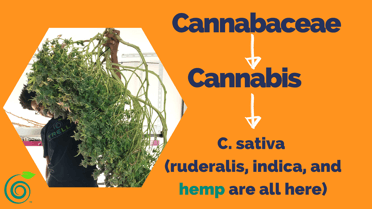 Others divide Cannabis plants into the three distinct species: 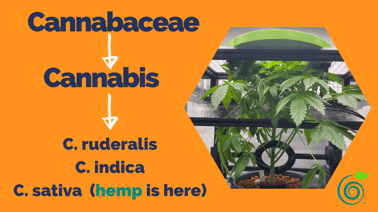 However you choose to view it, hemp is a Cannabis plant that is part of the C.sativa species, bred for properties other than its psychoactive effects. Simply put, hemp is Cannabis and Cannabis includes hemp. Once it is understood that “Cannabis” is a much more inclusive term, understanding of the Cannabis industry becomes much broader too. While marijuana may be used to restore balance in the body, hemp can be used to do the same for both the body and the planet.

Hemp in the Raw

Hemp is a fantastically versatile plant. For centuries, its raw material has been processed into topical and ingestible medicines, fabrics, essential oils, and food. In contemporary times, we also see a rising popularity in hemp-based cosmetics. The 2018 Farm Bill  defined the terms of “ industrial hemp” and its legal cultivation in the US, and since then, the agricultural sector has seen a sharp and continuous rise in hemp production to meet the parallel increase in demand for hemp-based wellness products.

But researchers have discovered that hemp is equally as beneficial to the environment  for its properties as a hyperaccumulator.  What exactly does this mean? According to the New Phytologist Foundation’s online library:

hundreds or thousands of times greater than is normal for most plants.

Essentially, there are plants that act like contaminant sponges, sucking heavy metals out of soils that have been polluted over the years. Places like New England are very familiar with the challenges of Brownfields remediation, as the soil is not plantable due to waste from jewelry and textile plants being dumped and buried during the American Industrial Revolution. Land that could potentially support agriculture and horticulture are instead contaminated, infertile, and abandoned.

One possible solution to cleaning up metal-contaminated soils is to plant various species of these hyperaccumulators which will absorb the contaminants into their roots systems over time, concentrate them in their tissues, and return the soil to a safe and workable state. This is a process known as bioremediation - or more specifically, phytoremediation.

Flowers such as heliopsis (yup! Sunflowers!) and joe pye weed can suck up heavy metals from soil. Likewise, rather than planting hemp as a crop to be harvested and processed, it  is planted as an annual to remain in the ground in its raw form, absorbing contaminants from the soil and air.

It may surprise some of you to learn that this technique of using hyperaccumulators to remediate soil is actually recognized globally and has even been employed in some pretty severe situations where radiation has been the contaminant . For example, both sunflowers and hemp were used to remediate soil after the 1986 Chernobyl disaster. Scientists in Japan are also using sunflowers to mitigate radiation from the Fukushima Daichi nuclear plant that was released into the environment as a result of the 2011  earthquake. Farmers in Italy have caught on, and are now cultivating hemp specifically for phytoremediation purposes, creating a whole other faction of hemp farmers who are working to care for the planet and its people.

This is where Trella Technologies  can bridge the gap between indoor and outdoor agriculture. While our goal may be to help create sustainable and ideal CEA best practices, we also seek to restore the planet in every way possible. If indoor, vertical farming lends itself to the mass propagation of phytoremediators to make outdoor land viable again, then there is a long game - put food and medicine into everyone’s hands now and make sure the planet is revitalized for increased agriculture in the future.

When we advocate for Cannabis, we advocate for farmers and farming practices that exist in alignment with our natural systems. We advocate for equitable access to plant medicine, healthier soils, reduced climate change, and a sustainable future for our growing global population. The technology exists to make these tasks possible. Perhaps the next step towards a future that embraces the multiple applications of Cannabis is to educate our fellow humans and lead by example. Who’s with me?

See you in the Fall, Growing Revolutionaries!